The lonely clifftop memorial to the courageous local defence of Britain in 1797.

Perched above rugged cliffs with amazing, sweeping views to North, East and West.

Start of the Battle of Fishguard.

The Carregwastad Point walk takes you to the rugged landing place of the French forces in their attempt to invade Britain in 1797. Access to this remote and emotive spot is only possible from the sea or the Pembrokeshire coastal path.

In 1797 the French Republican “Legion Noir” landed on Carregwastad Point, in what has been the Last Invasion of Britain, only to surrender to a much smaller force including the Pembroke Yeomanry hastily assembled under Lord Cawdor and the much famed local heroine Jemima Nichols whose ‘army of women’ may have made all the difference!

Two of the French frigates were captured and one re-commissioned in the Royal Navy as H.M.S. Fishguard. In 1853 Queen Victoria awarded the Regiment the battle honour “Fishguard” – making the unit the first volunteer unit to receive a battle honour and it’s still the only unit still serving in the British Army to bear the name of an engagement on British soil! 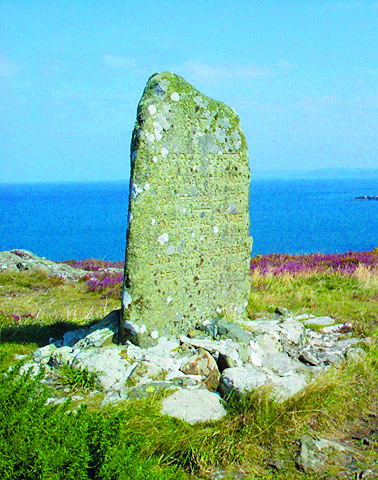 This invasion attempt was part of Revolutionary France’s attempt to export revolution to Britain. It has been thought that its intended invasion point was Bristol, but weather blew the small fleet off course. The full story of this invasion is wonderfully told in the 100ft long tapestry, made by over 60 local women to commemorate the 200th anniversary. This is in a special gallery in Fishguard Town Hall.

This walk can either use the Pembrokeshire Coast Path to reach Carregwastad Point or take a more interesting inland route from Goodwick train station to Llanwnda (https://www.plotaroute.com/route/1221923). An ideal position to reach is atop Garnwnda, which overlooks the entire area that the invading force of 1400 men would have occupied. Looking down onto the hamlet of Llanwnda you see St Gwyndaf’s church where soldiers sheltered (who wouldn’t in late February) and used pages from the bible to start their fires. The bible is on display in a special cabinet in this ancient church. In the north side of Garnwnda find an unusual slab burial chamber with a huge flat rock as the capstone.